The life of a rescue worker; try our best to win a fight for a dog’s life from the abuse and indifference of man. Every once in a while we’re tested by god’s ultimate plan.

I was excited at the prospect of reaching the top of Squaw peak again. It was an idle Sunday morning and I was hiking in the pristine Valley of the Sun, accompanied by the zealot Doberman from the Desert Doberman Rescue Group (http://azdoberescue.org/). His soft rust colored coat reminded me of butter melting on overdone toast.

The now five year old powerhouse, Cooper was abandoned in the desert as a six month old puppy. In the desert, filial instincts gave way to survival techniques. He’d been abused and maltreated and left for dead. 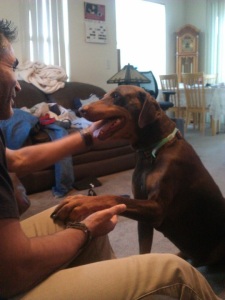 I shook my head. Who would be so vile to abuse this kind dog? He wants to please people, to the point of being servile. He craves attention, but is never in the way. He always turns around to make sure I’m not out of sight, as he prances to the top of the mountain. That day he seemed a little off his game. He was taking too many breaks. The Vet was concerned about his recent lack of appetite and had wanted to do a few tests. His results were due anytime–

—Burrrzzzzz. I peeled my cellphone out of my pocket. A closed envelope flew across the screen. Text message from Sidney flashed on the blue screen.

The world had collectively punched me in the gut. It can’t be. He’s so healthy and strong. I fumbled a few lines on the phone and finally types. They’ve made a mistake. It can’t be.

I tried pressing the send button send a few times. Dingggg. The message floated into cyberspace.

Squaw peak must’ve been as high Mt. Everest because we were the only ones at the peak. The world below was so far. The oxygen. What happened to all the oxygen?

Burzzz. I squinted at my phone. So sorry, Inder. The report is clear… I shut my eyes.

No way, God … This can’t be happening. Why Cooper? Why? Hasn’t he been through enough already? This is so unfair. So…I flung my phone, shut my eyes and held my face in my hands.

My grandfather’s face flashed before my eyes. Don’t you fucking try and give me some sage advice here, old man. Your wisdom is not—

–Cooper pawed my hand. I opened my eyes. He had my phone in his mouth. I rubbed the skin between his eyes. “Coop, why did you have to come into my life and make me love you so darn much?”

He dropped the phone in my lap. My grandpa smiled back at me on the screensaver. His words rang in my ears. A couplet from the Guru Granth Sahib; the holy book of the Sikh religion of Northern India.

Ikk nu bhejen is duniya te, Ikk nu kol bulayein.
(You send one new one in this world and call one back to you)

Darn it…I should’ve taken him to the Vet sooner. Maybe when he had the first symptom. If only I was a more regular volunteer, I would’ve noticed something sooner. Maybe—

Burzzzz. My thoughts returned to the present. The Vet’s given him a few weeks.

I held his face in my hands and kissed his forehead. “Please don’t leave me, Cooper. Please, buddy.”