You surely have seen several ways to restrain a puppy.

But I’m sure you haven’t heard of this.

A puppy got dropped of at the shelter in the wee hours of the morning yesterday.

This rottweiler puppy had its legs duct taped together so it wouldn’t be able to get far away from the shelter till we found it in the morning. 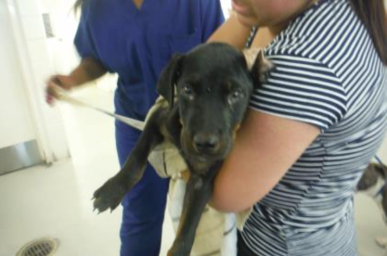 As we removed the duct tape off the puppy shivering because of the cold and out of fear, I realiszed that his hind leg was badly injured.

Then to underline the neglect this poor puppy must’ve faced- he tested positive for Parvovirus. 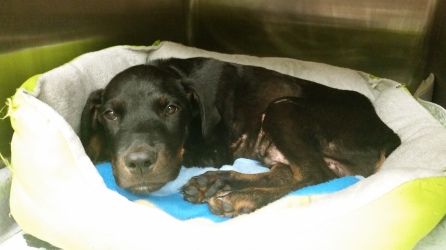 We got him in an incubator and on fluids and although he did vomit and had diarrhea (he broke) he did OK through the day.

In the evening I agreed to drive him to Austin for Austin Pets live where they treat Parvo puppies exclusively. Their building is nothing short of a fortified fortress against contamination.

I wasn’t allowed to go in more than 5 feet from where I had parked my Z-4. The puppy was plucked from my arms by the waiting Vet-tech staff and I was back in my fancy car.

I had once promised to protect my car from soda and eatables. Nobody was allowed to eat inside my car and today I transported a sick puppy that had Parvo. The smell of Parvovirus is so nauseating that once you’ve smelled it; the very mention of the word Parvo brings that smell to mind.

Tonight the puppy is safe and the car I love has been violated.