What do animals in pain need from us?

They need JUST ONE person too see them.

“Amritsar Junction”, Cindy squinted her eyes to focus on the yellow board the train was approaching. She thumbed the well-worn ‘Lonely planet’, guide she had purchased from the Delhi airport 20 days ago. ‘The city of a pond full of divine syrup’ – the loosest translation of this North Indian City of Punjab. A holy city for the Sikhs which houses the magnificent golden temple, made of solid gold, surrounded by the pond of holy water. For centuries its been a city the most important site of pilgrimage to the Sikhs.

Kindness and Compassion is the cornerstone of the 350-year old Sikh religion. Cindy is looking to expand her views about spirituality and diversity infused from her own sense of anti-speciesism. She is expecting to be enlightened.

As she steps out of the station she hears a low whine. A dog is lying on a mound of construction sand. His light brown fur is highlighted by spackles of blood. His black ears are curled backwards almost stuck to his big head. When she see’s his hind leg a sigh escapes her lips. All she can see is a stump. His leg is missing from halfway down with a wound bleeding, raw and infested with maggots.

She stops in her tracks and bends down to touch his head. He whines in pain. Cindy’s belief in humanity takes an instant hit. The lonely planet guide drops from her lifeless hand as she puts the hand to her trembling lips. “Who did this to you?” she forces back her tears.

In the next instant she gets up and shrieks, “Who did this to this dog? What has happened to him?” she looks around in a hysterical voice. “What the heck happened to this dog?” she shrieks till the station master comes running towards her.

After they’ve brought her a third glass of water the station master tells her of a story based on hearsay that a drunk person had come to the station one night and when the dog wouldn’t stop barking at him, he unsheathed a machete and hacked the dogs leg clear off his body.

Snot and tears dribble down Cindy’s face to her chin. The pain of an animal is not new to her – what is new is how people can just walk him by, oblivious to a dog in so much need. She wipes her tears and holds up her cell-phone…

77 animal lovers, 23 shares and 3 days later she finds an organization willing to help. Peedu’s People has the same beliefs Cindey has about veganism and kindness to animals. Inder sets off 300 miles away to check on the dog and gets the wound treated and maggots removed. 5 days of treatments later the wound starts to scab over and the dog starts to get up and eat copious amounts of food. He starts showing some of his quirky personality. He’s fun and wants to play, he has a girlfriend who has been sitting by his side and watching him heal everyday. He is pushy towards her and he starts being what we would later call- ‘ass-holey’. Once we save a dog- we name him.

An ass-hole dog, who loves to play and loves affection and has one leg hacked off- who else could he be but; Long John Silver.

3 syllabus names are funny for most people- but when a dog gets a name like such- he gets more of a swag to his weird gait. Soon we have a happy and healthy Long John Silver (LJS) who is prancing on the same sand-pile with his GF and since she is such a darling to him- she gets the name, Clementine.

So begins the search of finding a home for LJS. For months Peedu’s People gets no response. Then one day, 5 months later, out of the blue shows up the ultimate savior, Niz Khan. She agrees to rescue and place him in the UK but after 5 months we do not know if LJS is still alive.

Peedu’s People take off on the task of looking for him. Tina and Inder drive the 300 miles and search every nook and cranny of the Amritsar Railway station but LJS is nowhere to be found. Tired eyes and straining backs are about to give up when Tina points to a spot on the platform. Inder turns to her, Tina’s eyes are wide and she’s trying to mouth something but no words are coming out. Inder stares in the direction she’s pointing.

There he is, playing with a 3-year old kid, rolling on the ground. His now pink stump in the air as he flops on his back. Tina calls out to him and touches his face with the kindest of touches. LJS is now all hers. Inder picks him up and puts him in the car.

“We found him…we got him”, Tina keeps repeating to Niz over the phone. Tears of relief roll down her eyes and all Niz can think of is, “Where’s Clemetine?” 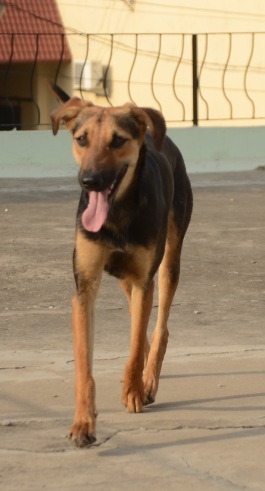 The two dogs have been snoring in the air-conditioned car. The harsh sun is beating down on the parched 45 degree celsius ground as the car races towards Chandigarh. The dogs are safe but a far way away from their ultimate foster-home in England.

6 months later, Clementine has been adopted. She is such a darling dog that she was sought after by several adopters. LJS, The ass-hole dog is still at the fosters.

But is he really an ass-hole dog?

The answer is NO. 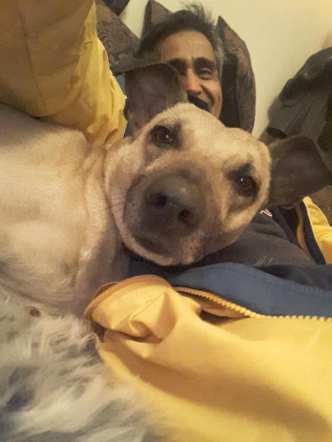 He is pushy to other dogs but that’s because as a handicapped dog he had to compete with healthy dogs on the streets for months. His pushiness has made him survive but he never bites another dog.

He got a lot of sympathy from passengers at the railway station but he got no affection. He lives for human affection. He will walk up to you on the tube in London and sit in front of you till you pet his brown head with cute black ears. His tail will wag till he knocks of some beer-mugs off the tables at the local pub. He will engage with every kid in the park. He is a drama queen for affection.

Imagine the pain and the fear a dog would have of a human if a human had hacked a leg off with a machete.

But LJS HAS FORGIVEN HUMANs for the sake of humanity.

He is still up for adoption and he is an excellent spokes-dog for his brother and sister strays that languish on the streets in India and elsewhere in the world. He struts his stuff on 3 legs everywhere in London. He is most at home in trains and at railway stations. 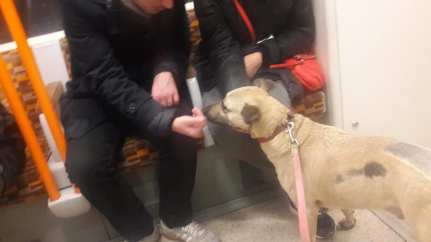 So if you are on the tube in London or national rail to Streatham Commons and you see an brown asshole, tripod dog sitting in front of you and wagging his tail for affection; please give him some because he really really really deserves it. 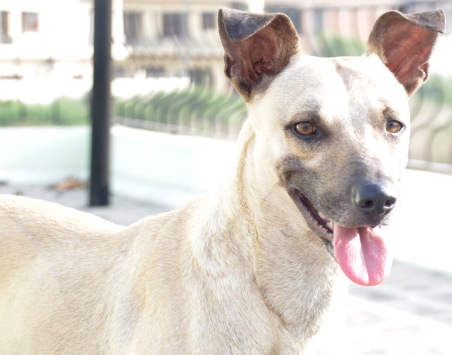