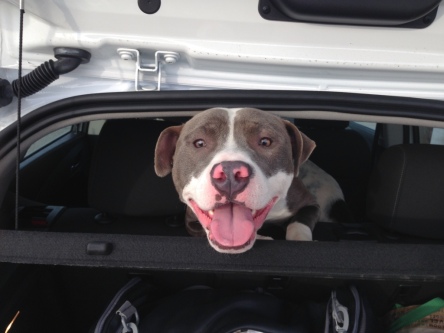 He’s THE classic example. ‘Do Good and Good things will happen to you’.

It’s the story of 2 dogs and how their worlds collide in total chaos. From the depth of despair rises hope that saves them both.

Karma- the grey and white Pit-bull had been found wandering the streets and picked up by an Animal Control Officer. One day while he was chomping down his food in his kennel at the shelter, the dog on the other side get’s through the handlers legs and into Karma’s kennel. They get into a fight and the trigger happy kennel staff labels Karma as an ‘Aggressive dog’.

So next day Karma is on the Euthanasia list. As he is being weighed the staff notices multiple puncture wounds on his neck. Per policy he is pulled off the list and sent to the clinic to be sutured.

Somewhere on the other side of town I pick up Foo-Foo fighter and his Mom (https://indersandhu.com/2015/06/11/ignorance-is-not-bliss-ignorance-is-impotence/) from extreme starvation and abuse.

Later that day the Vet is scrambling to find a donor to transfuse blood into Foo-Foo. Upon taking samples they find out that Karma is DEA 1.1 Negative- effectively a universal donor. 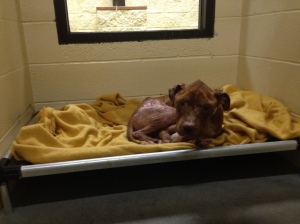 3 days later, Foo-Foo has had two transfusions and Karma has been sutured and is back on the Euthanasia list. When the staff is about to Euthanize him a note pops up on his records. Its a HOLD. The simple note reads- Do not PTS (put to sleep). He’s the donor baby who saved the cruelty-case dog.

So he gets another shot at life.

What surprised me is that in a shelter where scores of dogs are put to sleep every day, the shelter supervisor would use a word like ‘baby’ to describe a dog.

That’s when an angel named Tiffany asked me to get her a dog. I sent her 4 options ranging from an abused dog, a sweet puppy and a pretty eyed girl. Then I said to her I have another dog who is my favorite but he’s a black and white fully grown pit-bull and he has very little chance of being adopted.

Then I texted her Karma’s picture and waited- holding my breath.

I opened my eyes and read the text. OMG, Inder. I feel a connection with Karma. He’s the one I want.

I was sitting in front of Foo-Foo’s cage when she sent me that message. I kissed his head. “Your savior just got saved, Foo Foo.”

He saved Foo-Foo and saving Foo-Foo saved him. 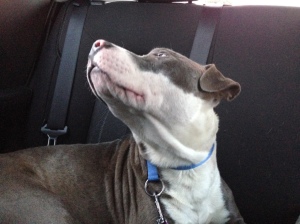 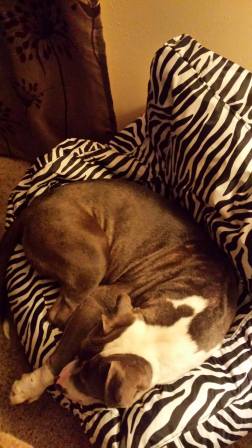