As I peel off my socks and groan the long day out, I run my finger over the mouse wheel.  My Facebook page races upwards and I pick up my re-heated sandwich from the Tupperware and take a big bite into the bland meal.

A piece of tomato escapes my mouth as I catch the image of a puppy, reposted from a page that sells goods. Puppy for sale. Will let it go for 100$. Several people have commented on ‘how sick they are with such posts’ and ‘how can FB allow people to post dogs in an item sale’. Some want to ‘kill the person selling it’, but most just say ‘how sad it makes them’.

Some parts of the rescue workers body function involuntarily. The brain gets put in the Tupperware along-with the awful sandwich and the heart kicks into over-drive. Ugggh. The long day is going to extend into a long night. I’ll need the nutrition. I stuff more of the sandwich in my face and crack my knuckles.

My desktop, laptop and cellphone are conducting Facebook searches, Craigslist scanning and I’m trying to rally a team to save the Coffee brown pit-bull puppy with a white butterfly patch on her chest. The freshly printed picture of the hazel eyed puppy is pasted over the portrait of my own beloved dog speed. Her eyes stare into mine asking me one simple question; will you save me?

Within half an hour my mind is saturated and my heart is overwhelmed by the number of ‘free puppy’ postings on Craigslist. All of these sweet pit bulls are headed to the dog-fighting rings that scour the underbelly of the American landscape. Why am I losing sleep over this one puppy out of all of these? I clasp a fistful of my hair and stare at my reflection in the TV screen. Because, she became mine when I looked into her eyes and saw a soul. Yes, there are countless others but today, right now- this puppy represents hope for all the other ones those will die this day. Her rescue will signify victory of good over evil. God, give me the courage to save her. The dog fighting rings are dangerous. I’m just one person. I touch the picture of Guru Gobind Singh – our tenth guru who gave his Sikh’s the famous line

(I will make birds fight hawks and win, one of my Sikhs will win against 125,000 of the enemy. Only then will I call myself Gobind Singh).

By morning I’ve tracked down the puppy and his owner. Now it’s a matter of pin-pointing the house and stealing the puppy. Yes steal it. My money will not go to the dog-fighters. By instinct, I offer a hoodlum fifty bucks, give him the picture and show him the house. He leaps across the fence and I drive around the corner and sit and …wait.

My mouth is running dry and my car’s engine has been idling for twenty minutes when I he turns the corner scruffing the weak tan puppy and ducking across the street. I throw open the car-door and he dives in. 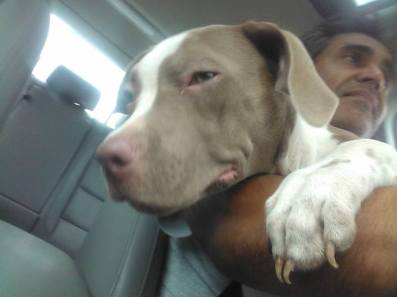 I ran every stop sign in the wretched neighborhood, stopping at a local Walgreens and let the man out. He counts the money and gives me a homie handshake. “Aiiight, Lemme know if you want sumthin’ else, bro.” He adjusts hi crotch, “Pretty dog tho’. What you be naming her?”

Her pink nose has been on my mind all day. She’s as pretty as the first stroke of paint on a blank canvas.  “I’ll name her Frida Kahlo; after my friend Tina’s favorite painter.”

“Thx Man.” I look straight ahead and gun it, driving till the yards are manicured and then finally I breathe. The puppy is sitting on the back seat and cowering. “Come here little, girl. You’re safe now.” Tears stream my face when I touch Frida for the first time.

She’s surprised by a kind touch and stands behind me on the car seat. She tentatively licks my ear and backs away. On her next lick I pet her head. She plants herself in my lap while we’re zipping on the freeway. She’s enthralled by everything; the steering wheel, the music, the air-conditioning vent letting out a stream of wonderful cold air.

For the first time in my life I take a selfie, while driving with a dog in my lap. I don’t want to be unsafe anymore because now Frida’s life depends upon mine. The past is behind me and it’s certainly behind her.

In three minutes she’s snoring. After two baths and some food, we head to my newly found friends Jill and Dori from Dori’s cat rescue. They rescue cats but just like me they couldn’t close their eyes to this puppy. My hard work for the night is over and theirs has just begun. 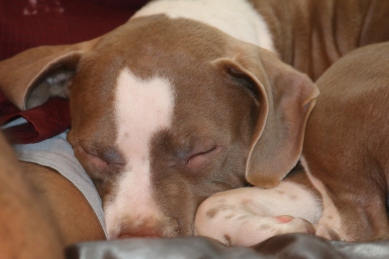 Within 24 hours she is transported to a foster and is even adopted. I know how hard these women have worked to save this one pretty dog. But I also know that in a matter of 24 hours Frida has touched the lives of all of us …and she’s just getting started. Frida has forever united me and Jill and Dori and Oktober into a cohesive team. 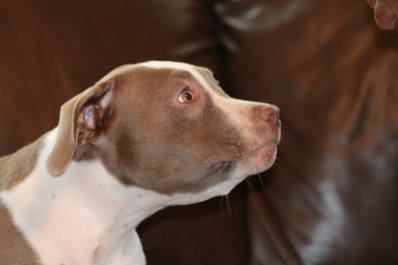 Tonight the evil will be out in full-force again, money will exchange greasy palms and dogs will die. Tonight several rescue workers will be disheartened and overwhelmed. But our team will sleep peacefully- Just like Frida will.

Tomorrow I’ll be disillusioned by a fresh dose of cruelty. But tonight I sleep- with new hope.

The audacity of Hope.