Nothing depicts the harmony and brotherhood in the Indian society like the festival of Holi. It’s one of the most joyous occasions for Indians. It signifies the victory of good over evil. The story comes from an evil king who tried killing his son by burning him alive for not worshipping him. God saved the child and the king and his evil sister were killed in the process. 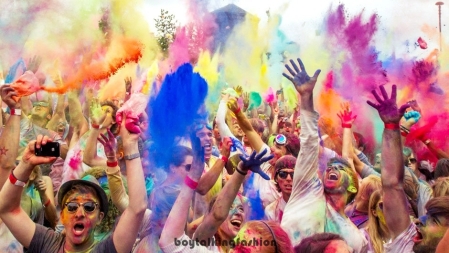 We celebrate Holi with colours. We drench everybody on the street in blue, purple, green and yellow. It’s like a big happy family and nobody’s a stranger. People forget about their personal squabbles and differences, playing Holi with great fervour.

Loading our Holi ammunition into a Jeep, we were almost out the big metal gate when the gangly Doberman puppy, Speed blocked our way. He was wagging his tail and as usual excited about nothing in particular. Stuti picked him up, “Let’s take him with us.”

“He’ll be in my lap.” She introduced him to the group. They pet him and he took turns licking everyone.

Her friend started, “He’s so–”

At the Punjab University the girls of Sarojini Hall hostel, who would run away from our rowdy group, now surrounded our Jeep, playing Holi with Speed.

My friend nudged me with his elbow, “Dude, can I borrow this babe magnet for a day?”

I made it a point letting everybody know that the puppy was my “loving brother”.

We took Speed to every friend’s house. We coloured their families, were fed hearty snacks, sought blessings from elders; then we moved onto the next house.  It seemed like an extension of how Speed lived his life every day. The entire neigbourhood was his home and the inhabitants including the strays, his family.

Now our equation had to morph into that of two bickering brothers; quarreling, arguing, fighting, complaining and wing-men at the end of the day.

The measure of how much fun we have playing Holi is determined by how many days it takes in washing the colour off our skin. Nobody minds when we show up at work on the day following Holi with monkey-like faces. 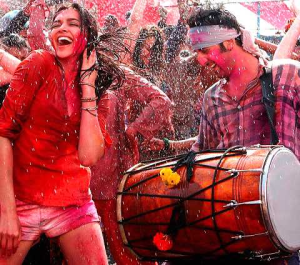 Speed’s coat had been covered with silver coloured oil paint. Our friends had spared his eyes. The black hair around his eyes and the silver paint on the rest of his body gave him the appearance of the Lone Ranger. His body looked like that of his own horse, “Silver”.

“Who is that masked dog anyway?” Mom asked.

We three brothers weren’t allowed in the house post our “Holi romp”, our “Toofani gaeda” (whirlwind tour). We bathed in the yard, rinsing colour off each other, prancing, frolicking, playing, to mark the end of the joyous day.

5 thoughts on “Holi- The Festival of Colors”