RAMBO- The Size of the Fight in this Dog? 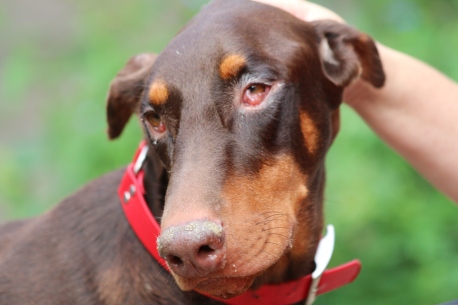 I’m carrying a brown and rust Doberman into the ICU. His nose is dripping snot on the floor as his head lolls back and forth on my arms. Having rushed Rambo to the Emergency Vet at Gulf Coast for the third time in the past three weeks has drained me of all energy- but I still have the one thing that drives all of us rescue workers- Hope.

His body feels like a sack of potatoes in my arms and I lay him on the stretcher. The compassionate workers at the Houston Area Doberman Rescue (HADR) have given all of themselves into saving this 18 month old Doberman. We all stare at each other with empty eyes as the doctors take over his weak body.

We gave Rambo our heart, we gave him our love, we gave him our blessings, we gave him our hope…His health recovered briefly before failing again. The countless compassionate donators who paid a part of his staggering hospital bill and his loving foster Cindy who showered boundless love and care to Rambo all keep their hope alive for Rambo.

And he gave us his love.

Our tired, sleepless eyes and confused minds try and make sense of the doctor naming Rambo’s illness- Ligneous Conjunctivitus. A condition so rare that six cases of the disease have been reported so far, five of them Dobermen.

“His body can’t sustain life any longer.” The vet pinches his nose under his thick glasses. “This could be a Doberman relevant disease and Rambo’s body will help his fellow Dobermen. We would like to use his body to research this devastating disease. If you could–”

“Yes.” Cindy blurts out. Then she puts her soft warm hand on mine. “That’s what Rambo would want, Inder.”

My legs stagger. His body? But he’s only a puppy—He has not known life yet. At a year and half old, he just started living a few weeks ago.

At the end of the day- that is all he had; his Body. That is all we gave him- taking from him his freedom, his puppyhood, his comfort and his shot at life.

We took his life- You and me- we did. Not just the vile excuse of a man who tied him to a tire and a cage outdoors for a year and a half, starving him. The only water he got was off a drain. We shut our eyes to cruelty too often. We let the perpetrators slip through the cracks too often. The reason why that man could do this is because he knew he wouldn’t be held accountable.

When the last dog the owner had (the boxer) died, he should’ve never been allowed another dog. But he got Rambo- and we didn’t care.

So we failed Rambo. You and I did. Humanity did.

I wow today that never again will Rambo’s owner own another dog. If he gets one I’ll steal it. If he gets another one; I will steal that too. I am a thief- so let it be written- so let it be told. I have no shame.

Today Rambo was Euthanized, his favourite toy duck by his side. He had just learnt how to play with it less than two months ago. Today his Duckie held his paw as he crossed the rainbow bridge. I had failed to say goodbye to my friend Cooper a few years ago. Today I didn’t turn my back on Rambo. My heart is broken in so many pieces today that I don’t think it will mend. 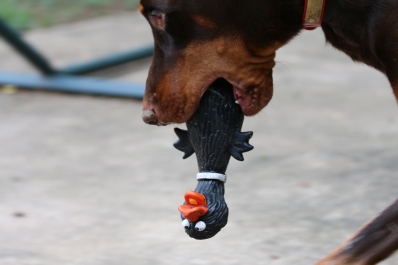 But it will have to. It must- Just like it did when my own Speedy passed, or when I couldn’t bear to see Cooper be euthanized. Or when Tina found Mi Corazon crushed and flattened on the road in Phoenix or when Sadku was euthanized for no apparent reason.  My heart must mend because like anyone in rescue it the next one you can save that drives us and not the ones we failed.

Every bit of Rambo means love. To us humans; Love is selfishness. Love has thrashed the greatest of goals and desires into the most mediocre of fights (as I found out very recently). His love means giving and strength despite what we put him through.

Today Rambo closed his eyes for the last time.

Will we open ours? 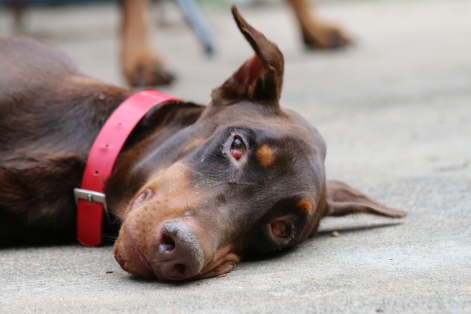 20 thoughts on “RAMBO- The Size of the Fight in this Dog?”