The abused dogs have new names-

The following day, the Vet told me he was toying with the idea of humanely euthanizing the puppy, when I saw him sitting with the two dogs in the sun. His labored breathing and lack of energy caused the Vet to crease his fore head.

I couldn’t tell him what to do directly and challenge his medical opinion- but here’s what I could do; put a doubt in his mind. “We need him for the cruelty case and any evidence the court might need. Maybe he’ll be better in a day or after another blood transfusion.”

So next morning I approached his kennel gingerly; Hoping.

I closed my eyes and faced his kennel. Then I looked.

There he was- wrapped up in a blanket and an incubator light on him. I finally let out my breath.

Then the next day- and the next. There he was- alive, and a bit stronger each morning.

He ate some solid food.

The incubator was turned off.

Then he survived the weekend.

Today was the court hearing. I showed up in court with a thick folder of midnight oil burnt. Pictures, reports, expert opinion, sketches, layouts, interviews with neighbors. The whole nine yards.

It took the judge less than three minutes after going through my report to issue a warrant for the owners arrest.

The coward has sent his sister to the hearing. She stood in the witness box and claimed that she had found the the dogs as strays in emaciated condition.

“If I could draw your attention to exhibits 18, 23, 27 and 32.” I pointed with my laser pointer. “There is no sign of feces in the areas where these dogs were. For weeks they have been eating their own feces as the only means of nutrition. Exhibit 48 is an X-ray of their stomach.” I tried to force my bile down again pointing to an X-ray I’ve seen a thousand times in the past 4 days. “This dense grey mass is feces.”

The sister opened her mouth but no words came out. She slumped back into her chair.

Today when I came back to Foo Foo and Athena’s kennel I was smiling. “We got him Foo Foo. We got him. He will face justice.”

Foo Foo stood up and wagged his tail. I saw a new spark in his eye today. I took some pictures to prove it.

Maybe – just maybe. One day they will heal and know life like both of them deserved . Love and tenderness- safety and LOVE.

I bite my lip. Don’t answer it, Inder. Let some other officer take this call. Don’t fucking answer—

“Go ahead, PIC.” I withdraw my errant thumb from the radio button. –Darnit, Inder.

“Abandoned house on map-score 76X has two pit bulls in the backyard. Seems like they haven’t been fed for a very very–” He sighs. “—Just hurry, Please.”

I pull over to the side of the road. 76X is not my map-patrol area but suddenly I feel like the only one who can respond to the Public Interest Call (Police call).”

“As I pull up to a yellow house with knee high weeds in the yard and knock on the door trying to avoid the splinters, the police officer peeks around the corner.

I look into the backyard and immediately look away. I take three deep breaths and look again.

A brown and white pit bull is struggling to get up. He keeps falling back into a small pit his body has dug up from trying to wiggle around in an effort to get off the ground. His tail is wagging slowly at the sight of a human. There is so much pain in his eyes and just a glimmer of hope. 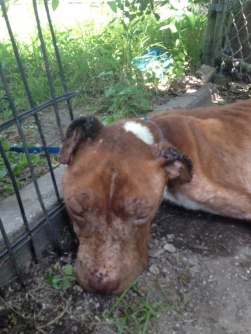 As I open the gate and rush towards him a swarm of flies settled on his bleeding ears fly away. I pull out my canvas bowl and fill it with water. He drinks it as fast as he can. His gums and tongue are white as chalk. He gaaks and throws up the first water he’s had in weeks.

I do a quick capillary refill test. I’ve counted to 1009 and his gums haven’t regained any colour yet. I say my first prayer in the week.

He struggles to get up again. I place my arm under him and help him up. 25-30 pounds, max. My hand easily encircles his non-existent waist. His pelvis is protruding and I can clearly see one side of his ball and socket joint. Then he stands up fully and I see it—

–A wound the size if a golf ball on the side he’s been sitting on. The sharpness of the hip bones have broken through the skin on that side and it is swarming with maggots.

His front legs almost give way and I catch him on his way down. I want to take him in the truck and feed him and get him out of the suffocating heat. But I also need to make my cruelty case water-tight. I say my second prayer of the week and apologize to him. I’m sorry on behalf of humanity that someone did this to you. I must bring that person to justice. I must take pictures of you and these filthy surroundings to be able to prosecute the person. 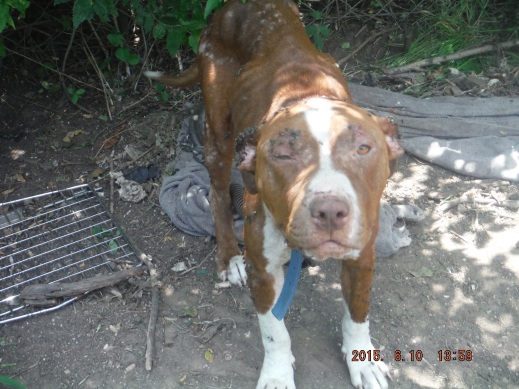 That brings me to the second dog. She has two 25-pound cast iron weights tied to her collar. She’s just marginally stronger than the first dog. She’s a mama who’s had puppies recently. I say a prayer for the puppies, knowing all to well that they must’ve been sold for drug money or bait-dogs.

A few more pictures later, I load both of them in the truck and call emergency code to the Vet-staff. The entire shelter is now in Code-red mode.

As soon as the truck is put in neutral and I pull the hand-break, a team of vet-techs descends on the truck. The dogs are unloaded and taken in. The Vet rushes past me as I am dusting my uniform ordering ice and water from a vet-tech and I.V fluids from another.

I sit down on the curb and curl into a ball, finally the tears come- but only behind the aviator sun-glasses.

After my shift was over later today, I walked into the emergency clinic fully expecting the empty gurneys. But there they were, sedated to lower their blood pressure and being given their third bottle of blood.

I remember my ACO cruelty training class. When a dog’s body fat is so low that even I.V fluids are rejected, the very last hope they have is blood-transfusions.

These two dogs are on their last chance and I am sitting on a desk writing this blog and praying that I see them again tomorrow.

My gentle touch on the dog’s head before loading him and promising him to bring the person who did this to him to justice is haunting me. Too many times and too-easily do the perpetrators of evil fall through the cracks. Too many times neighbours see cruelty and look the other way. This happened over several months or years and EVERYBODY looked the other way.

Too many times humans fail these dogs. I hope I don’t fail them. I can’t…I won’t…